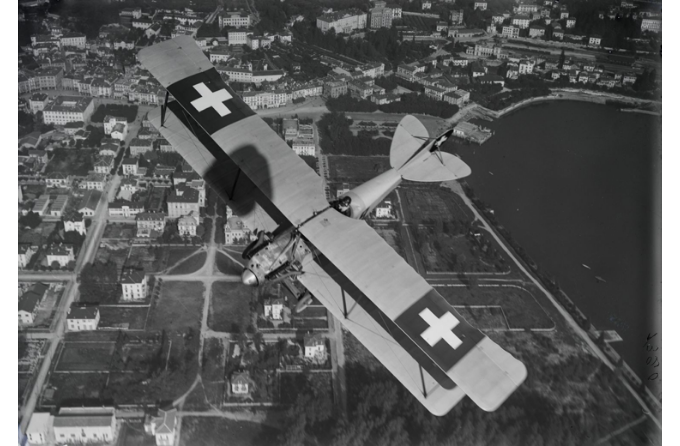 Insubrica Historica continues to support the discovery quest of the Insubrica region heritage. We would like to introduce to our readers another new tool, following our article on geo.admin.ch. It is like a “participative time machine” which can help volunteers to geolocate historical images of Switzerland, taken in the time when GPS and other aviation aids did not exist. This article will also be about Walter Mittelholzer who was a fervent aviator. Besides, he was the co-founder of the famous airplane company Swissair. As we will see, he was an avid aerial photographer and had a penchant for the Middle East, particularly Persia, and for African cities beginning from Cairo to Casablanca.

You have to access the website, choose the given collection for eg. Walter Mittelholzer and start to browse. It seems that the graphical plugins best work with Microsoft than Apple even if all the pictures are still accessible with a Mac Book Pro.

We appreciate this application as it allowed IH to determine with accuracy when Walter Mittelholzer (1894-1937) flew above the Insubrica region and specifically above Locarno.

As a matter of fact, Mittelholzer was a notable Swiss aviation pioneer. Most likely, he was the person who contributed most to aviation in Switzerland; if the company Swissair came into being, it was all thanks to Mittelholzer. He was a pilot, photographer, travelling writer, and also the one who became the first aviation entrepreneur. Mittelholzer supported his activities by selling photographs and receiving donations from patrons.

He created a great collection of pictures, combined together from his flights that was more than 9`000 copies in black and white. His pictures were taken at different altitudes, even the low ones. According to Smapshot, a rough distribution for the Insubrica region pictures done by Mittelholzer’s could be the following: 43 pictures in Valle Leventina, 31 around Bellinzona, 60 in the region of Locarno and 112 in the region of Lugano.

For obvious reasons, as Mittelholzer was also an official Swiss Air Force pilot, he could not do pictures of the Italian part of the Insubrica region. It was not uncommon to have Mittelholzer flying around 300m to snap a picture of the beneath landscape.

Mittelholzer flew above the Insubrica region already in 1919, taking pictures of Locarno and Lugano. In 1924-1925, he did a historic flight from Zurich to Persia which was from Zürichhorn to Pisa Marittima.

Mittelholzer returned to the Insubrica region in 1929, at the end of April. He continued to fly over the Canton Ticino till 1933. He used essentially a Swiss aircraft Häfeli DH 3M , taking a wealth of pictures according to the Smapshot website. He died in 1937 in the climbing accident, being a member of the expedition in the Hochschwab massif in Styria, Austria.