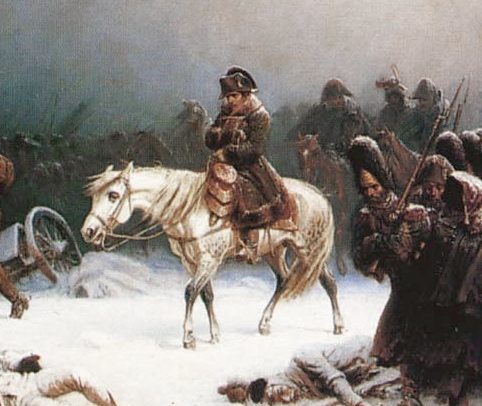 An important chapter of Insubrica, which we have already mentioned in the past (see Mainoni butcher of Stans), is the Swiss army that fought for Napoleon’s campaigns. It is an important chapter, that saw many Ticinesi perishing for Napoleon, particularly in his 1812 campaign against Russia.

The constant campaigning of Napoleon, notably since 1805 had taken an heavy toll on its troops. About a third of the Swiss in the service, even in garrison places such as Holland, suffered from endemic fever. Added to this situation there were many deserters, despite a severe military penal code. Undoubtedly that what happened in Spain, particularly the hardship of the military engagement there, affected heavily the unpopularity of the military service in Napoleon’s army.

Napoleon attempted in 1811 to reorganize the Swiss contingent. This reorganization touched mostly the 2nd, 3rd and 4th Regiments positioned in France. Despite the heavy toll on Swiss economy and a famine in the Eastern part of Switzerland, a new capitulation of 25 years renewing the defense agreement with France was signed in 1812. This agreement successfully reduced the number of Swiss serving in the French army, which was settled to 12’000 soldiers with a yearly replacement of 2’000 soldiers.

The picture right is the cartographic depiction by Charles Joseph Minard (27 March 1781 – 24 October 1870) of Napoleon’s disastrous Russian campaign of 1812. The graphic is notable for its representation in two dimensions of six types of data: the number of Napoleon’s troops – one millimeter for every ten thousand men!; distance; temperature; the latitude and longitude; direction of travel; and location relative to specific dates. The picture left is the real geograpical plottin on a map. Picture left comes from the brillant analysis of Minard work published on Throughbot.com blog (source).

For the invasion of Russia in 1812 all four Swiss Regiments served together in General Merle’s of Marshal Oudinot’s II Corps. From June 1812 the Swiss troops were mostly positioned in the left flank of the Grand Armée – which counted 500’000 soldiers – as it entered the Russian territory. Soon extremes of weather, shortage of food, bad water, and the wide distances covered by foot contributed heavily to a massive degrade of the fighting strength of the Swiss troops. The Russian army applied a burned soil tactic, so that the entire Russian country was devastated. All hamlets being looted as the peasant fled the enemy army.

In mid-August 1812 the Russian Army under General Count von Wittgenstein managed to attack the major French arsenal in Polotsk (present Belarus), on the Dvina river. Only with the fierce intervention of the Swiss troops could the attack – which lasted two days – be repulsed, so that General St. Cyr unmistakably pronounced the following words:

The French are more impetuous in an advance, but if it come to a retreat, we can count on the calm and the courage of the Swiss. This is why I kept them in reserve today.

Having Napoleon established Polotsk as his main base for its flank, the progression towards Moscow resumed. It followed a large confrontation in September 1812 at Borodino. There again, the Russian commanded by
von Wittgenstein attempted a second attack at Polotsk, conducted between 18-20 October 1812. Again the Swiss Regiments excelled in repulsing also this second attack. The toll was however very heavy, so that at least 70 Swiss officers alone in this second battle died. The overall losses accounted to at least 1’100 soldiers for the 1st and 2nd Regiments, as well as 400 perished soldiers from the 3rd and 4th Regiments.

Napoleon retreat from Moscow started on 19 October 1812. The progression this time westward, was chased again by von Wittgenstein. What remained of the Grand Armée reached the Beresina river on 23 November 1812. The sparse Swiss contigent, reduced to approx. 1’000 soldiers secured the westbank of the Beresina river. For long time Beresina has been associated to a defeat, even so that in French language, saying Beresina means nothing more that “…catastrophe, échec, malheur, calamité, fléau, accident, désastre, crise, bouleversement, cataclysme, misère…” . However in more recent times, it is recognized that Napoleon’s effort in Beresina, was even if it was a retreat, rather a won battle. Particularly with the sacrifice of the Swiss troops, among them many from Insubrica, was the Grand Armée able to successfully pass the river and pursue their retreat.

Napoleon’s momentum toward west continued immediately after the crossing of the Beresina river. The climate conditions worsened, so that on 14 December 1812, in temperatures of -27′ Celsius degrees, the few survivors of the four initial Swiss Regiments recrossed the frozen Niemen river, heading for a temporary garrison at Kostrzyn nad Odrą (Küstrin), at the today border Polish-German border. The overall losses of the Swiss Regiments in Napoleon’s campaign were considerable. In January 1813 the Swiss had only enough men to form four companies (approx. 120 soldiers).