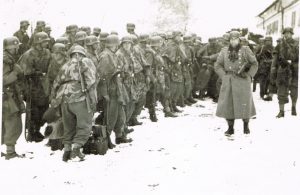 Willy Tensfeld's Bandenbekämpfungsstab West headquartered in Monza/Milan was responsible from November 1943 till April 1945 for most of the German and Fascist raids conducted in the Piedmont region. There were about 50 round-ups, alone in 1944 more than 45, which were designed by this particular General Staff. Under the operational […]